Over this past winter, if you’ve been keeping an eye on the Bayview Garden project on the northern part of the property at St. Cuthbert’s Church, you will have noticed significant change – especially in the dry stone wall going north from the church front entrance.

The man responsible for the wall transformation is Menno Braam, who began this project last fall – carefully moving all the stones from the head-height wall into a caged-off portion of the church parking lot. Then, once regrading had taken place at the corner, he spent the winter moving those stones back again – but this time, into a lower drystone wall, and a plinth for an electronic sign. There is still more than enough stone for the next part of the project – completing a water feature farther down St. Cuthbert’s Road.

Menno worked in all kinds of weather conditions, often with only a tiny tent to offer protection from the weather.

Braam is one of the founding members of the Dry Stone Walling Association of Canada. There are about 50 members now, most of whom work in Ontario. He also holds two levels of certification from the Dry Stone Walling Association of Great Britain, as well as instructor qualifications. You might well have seen him at Canada Blooms over the years, working on demonstration dry stone wall projects with other professionals.

Originally from Etobicoke, Menno worked in a video store after high school before joining a landscaping company. His parents encouraged him to attend Bryn Athyn College in Pennsylvania where he studied philosophy and religion for two years. But what stayed with him most when he returned home was the beautiful stonework of the buildings there, and more particularly the dry stone. Since returning to Canada, Menno has completed five years of apprenticeship and continues to upgrade his qualifications since starting his own business – Whistling Dwarf Stonework – in 2001.

Why Whistling Dwarf? Author Graham Hancock, in a book, Fingerprints of the Gods, credited whistling dwarfs for some of the world’s oldest and finest stonework in Peru. Apparently, they whistled the stones into place. No such luck for Menno. His work requires strength and good judgment, along with regular chiropractic treatments to keep him going. 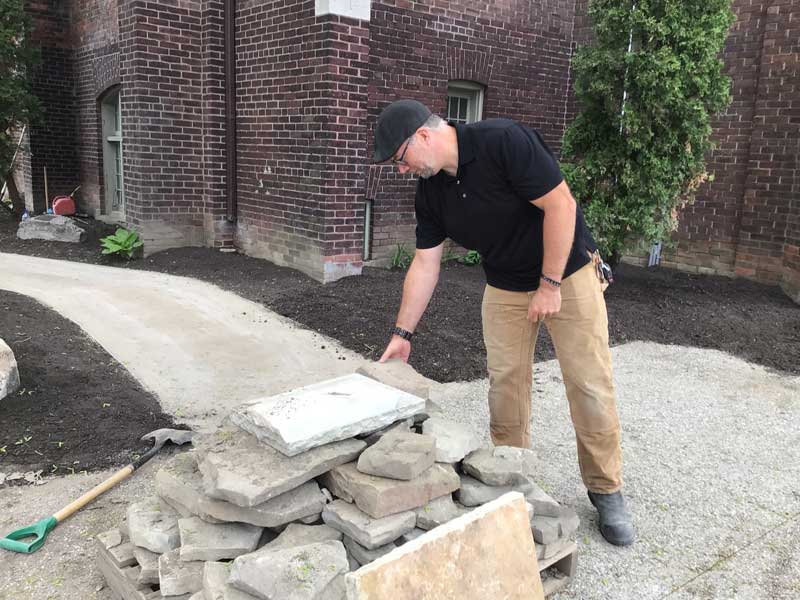 And while dry stone work is what he dearly loves, he is happy to take on other projects for walkways, benches, and even projects involving mortar. Menno also teaches workshops for Landscape Ontario for people in the industry, and weekend courses through Dry Stone Canada that appeal to those wanting to tackle a project on their own property.

When he and I spoke, he gave me a bit of a crash course in dry stone techniques. The largest stones are at the bottom, and the wall is thicker at the bottom than at the top. The wall needs to be thick enough to withstand frost heave. The stones overlap, so water doesn’t get trapped. Around knee-height, every few feet there are “through stones” going back-to-front in the wall, stitching the two halves together. According to Menno, dry stone work is a combination of “friction and physics.”

One piece of advice he offered: even if it’s tempting, don’t pick out what looks like loose stone in a dry stone wall. In fact, that stone is quite solid.

Chen Cho, his wife Diana and sons Sydney and Kevin are the heartbeat of Passion Fruits and Savory Thymes. They enjoy being part of the Leaside neighbourhood, and the neighbours return the compliment. As I …more

The artefacts of our local history surround us: a strange coin in the corner of a drawer; a dog-eared photograph in an old scrapbook; the faded lettering on an old building that reveals its original …more

There wasn’t a letter from the Queen. No one (physically distanced) delivered a big fancy cake. There weren’t even any (virtual) slaps on the back and comments like “Wow, you look great for your age!” …more