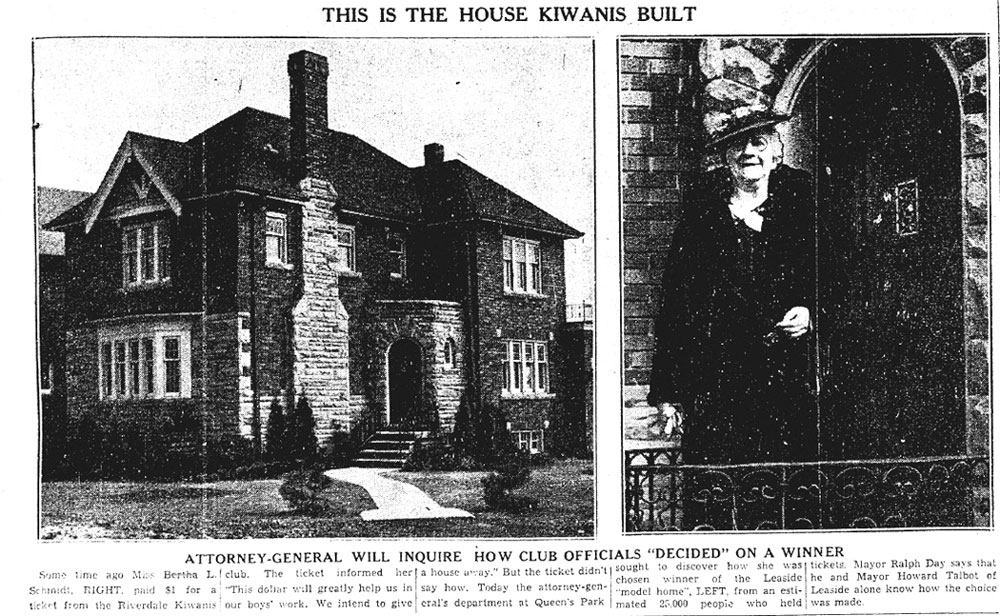 On the eve of World War II, a strange event took place in Leaside that captured the attention of much of Toronto, and beyond.

It all began when the Riverdale Kiwanis Club of Toronto decided to sponsor a charitable project to build a house – and then give it away. The plan was to sell tickets to donors and use the proceeds to help disadvantaged boys.

Things went well…at first. A site was selected at the NE corner of Bessborough and McRae (now 107 Bessborough) and contractors chosen. This was followed by a ground-breaking ceremony in August, 1938 involving several Leaside dignitaries – including Leaside Mayor Howard Talbot.

By year end, the $11,500, fully modern, nine-room house was ready, and its official opening scheduled for January. Inauguration day saw nearly 200 people watch Mayor Talbot and Toronto Mayor Ralph Day formally cut the ribbon that would launch the Kiwanis Club’s campaign, during which the house would be open to the public.

Both the Globe and Mail and the Toronto Star ran stories about the property, dubbed the “Kiwanis Model Home.” Contractors and suppliers, like Consumers Gas, paid for expensive print ads promoting their role in building it. Mayor Day even used it for subsequent photo-ops.

All went well right up to the day when the house would be given away. Then the problems started.

During the campaign, the Kiwanis Club had sold $25,000 worth of tickets (at one dollar each) to approximately 25,000 donors. The club named the winner on April 22: Bertha L. Schmidt, whom the Star described as a “kindly gray-haired woman.”

Almost immediately, the unmarried Ms. Schmidt declared she would not move into the house because it was “far too large.” This put the Kiwanis Club in the awkward position of having awarded the house to someone who refused to live in it.

At the same time, Ontario Attorney General Gordon Conant announced he was launching an inquiry to determine if the house giveaway was even lawful. Lotteries were illegal back then, and to Conant and others it appeared as if the Kiwanis Club had operated one big lottery.

This was vehemently denied by the two mayors, who maintained they had selected the winner using their own system. But they refused to provide details – which raised suspicions even further. As a result, Kiwanis officials were charged with violating the criminal code and Mayor Day was subpoenaed to testify – along with Mayor Talbot.

The press naturally had a field day with the story, which was covered extensively by newspapers in Toronto, Windsor, Ottawa, Nanaimo and even Niagara Falls in New York State.

Eventually, the excitement died down, normalcy returned, and no one went to jail.

Neither venture, one suspects, was quite as exciting – nor as controversial – as the great Leaside house lottery of 1939.

Correction to my March heritage column: According to Google Maps, the Leaside Transformer Station is located slightly north of the Millwood CPR underpass.