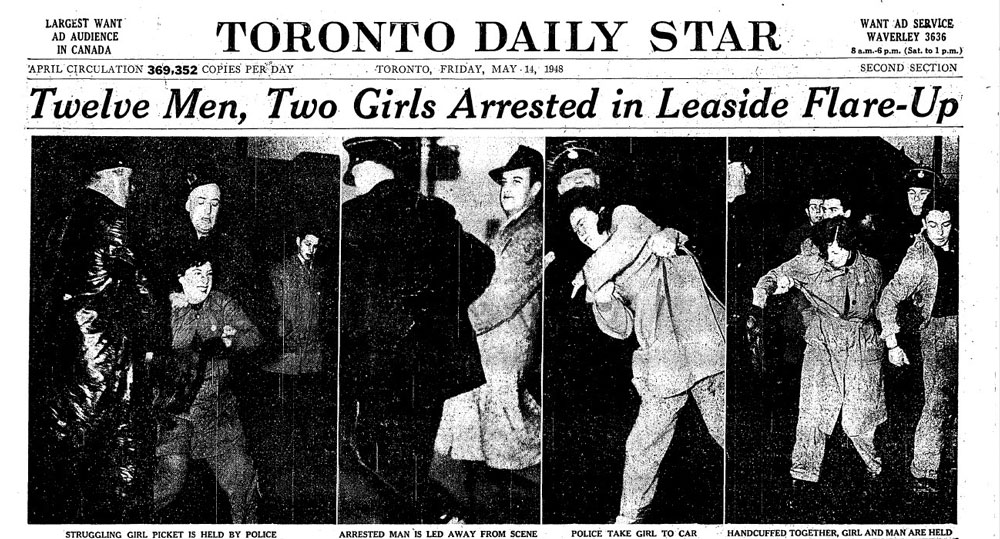 Leaside has a well-earned reputation as a tranquil community. But in 1948, it was the scene of a bitter labour conflict involving unions, police and Leasiders themselves.

It started in late January, when management at the 700-employee Rogers-Majestic radio manufacturing plant at Brentcliffe and Eglinton failed to renew a labour contract with the United Electrical Workers Union (UE). The issue was money. The union sought a pay increase. Management said their demand was too high.

A strike ensued in early February and picket lines formed. When the picketers barred company engineers from entering the plant, Rogers-Majestic responded by urging Leaside’s Municipal Council to call in the Ontario Provincial Police to protect its staff. The province complied by dispatching 75 policemen to the scene. This was viewed by the union as a provocation, and tensions rose.

Things came to a head on February 26 when two office workers trying to enter the plant were met by strikers handing out pamphlets. Interpreting this as an attempt to deny them entrance, provincial police charged the union picket line. A free-for-all erupted in which the picketers were forcibly dispersed. Police arrested eight strikers (including a young woman and a disabled man) and dragged them into waiting patrol cars. Onlookers witnessing the melee booed loudly. In a show of solidarity, other unions joined the strikers – increasing their number.

Fearing more violence, the Ontario government arranged a temporary truce between the company and the UE. The strikers returned to work as wage negotiations resumed. The talks soon broke down, however, and by early May the picket lines were back up. But the worst was yet to come.

A rival union led by the American Federation of Labour (AFL) began encouraging employees to break the strike. This led to a direct confrontation with the UE. On May 2, the situation exploded as armed fights broke out between the two unions – one trying to prevent workers from entering the plant, the other trying to get workers in.

One week later, a second, more violent clash occurred. This time 500 pickets and 70 provincial and Leaside police fought each other in a pitched battle involving pushing, kicking, punching and billy clubs. Eight people were arrested. Two days later, on May 14, another outbreak occurred, where eggs, rocks and other objects were hurled at the plant and police. Disturbances were reported at various bus stops throughout Leaside. Strikers also blocked the Eglinton/Laird intersection.

When the strike finally ended later that year, 34 people had been arrested and many injured – thankfully, none seriously. Several strikers went to jail. Several others were fined. Workers at the Rogers-Majestic plant later voted to determine which of the two opposing unions should represent them. The outcome was undecided. As a result, the Ontario Labour Review Board authorized the AFL to represent the workers, replacing the UE and ending this violent episode in Leaside history.

This article was guest contributed by Ted Dewelles of the Leaside Heritage Preservation Society.