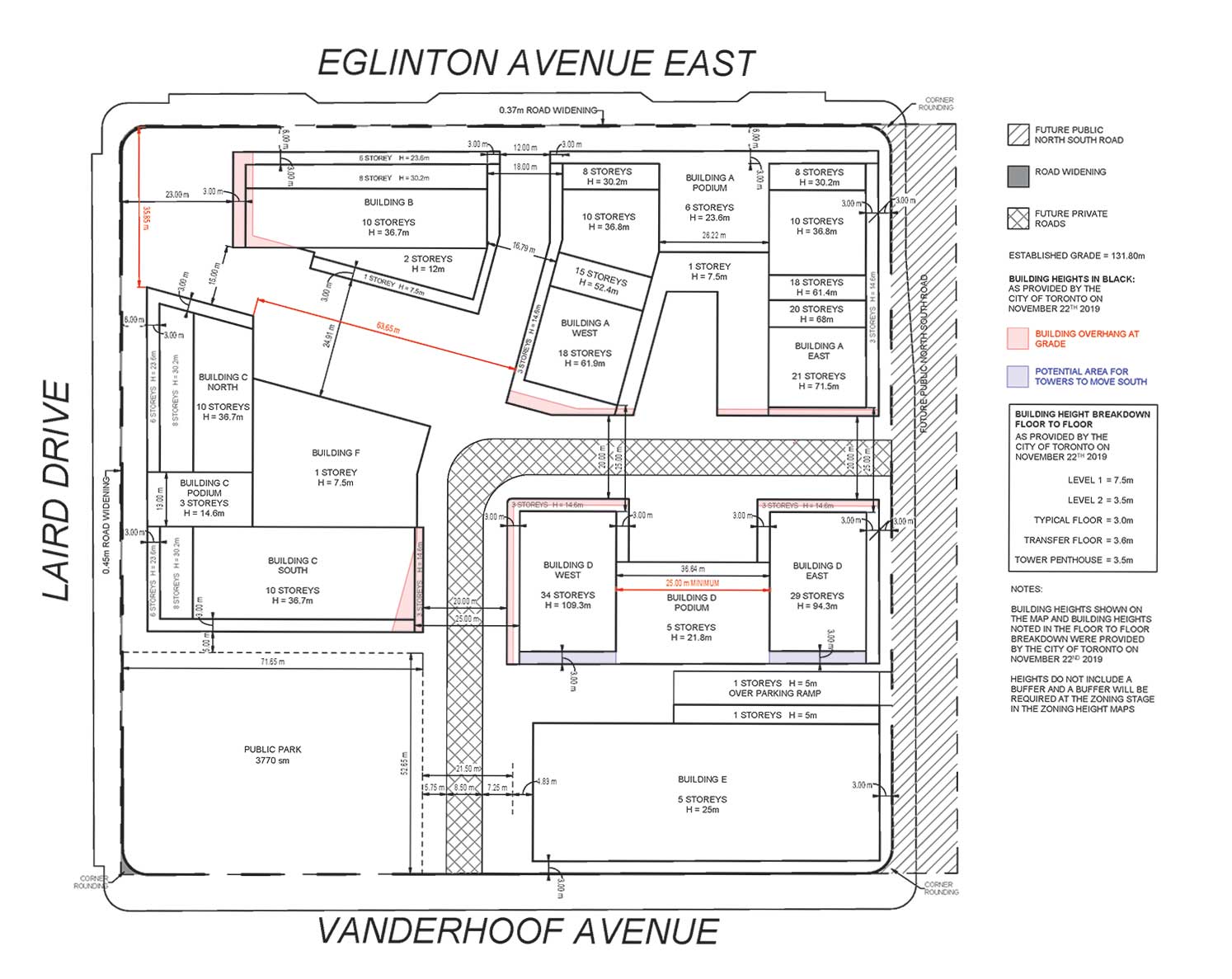 Last month’s column described how the City moved forward with its Laird in Focus Plan. RioCan’s development application for 815-845 Eglinton Ave. East was approaching decision point at the Local Planning Appeal Tribunal (LPAT), and the three Parties (RioCan, the City and the LPOA) agreed to sit down to try and reach a settlement.

After meeting for three days, a settlement was reached, approved by City Council, and set to go to the LPAT for ratification on December 19.

Details of the settlement –
let’s get technical!

The two main components of the proposed settlement are Built Form and Section 37 (in-kind commitments and cash payable by RioCan), known as “community benefits.”

The Built Form changes are:

• A reduction in the two towers from 36 and 38 storeys to 34 and 29 storeys with the 34-storey builder closer to the proposed Eglinton Crosstown LRT station.

• A reduction in the midrise component of the building next to the proposed public park from 12 storeys to 10 storeys, with the office building increased from 4 to 5 storeys.

• A 6-storey street wall along Eglinton Avenue East and Laird Drive will wrap around the buildings facing the Privately Accessible Public Open space (“POPS”) at the corner of Eglinton and Laird and the
proposed public park.

• Improved sightlines from the two proposed POPS to the internal private street by increasing the separation distances between buildings and increasing space provided at grade.

• Restrictions on protruding balconies in specific portions of the development.

• Adherence to a 45-degree angular plane originating at the property line from a height of 80% of the respective rights of way of Eglinton Avenue East and Laird Drive maintaining good access to sunlight.

• The overall FSI (density) will be 3.87, which is not changed, but the proportion of residential is decreased and that of commercial/office is increased.

• A 62-space daycare facility to be provided on site (with additional funds for startup costs).

• 40 affordable rental housing units to be provided on site (to be secured as affordable for 15 years, and as rental for 25 years.

There will also be an agreement between the City and RioCan for the provision of:

• 10% of the units in the development as 3-bedroom units.

• Easements to secure public access to the POPS spaces, the private pedestrian mews connecting to Eglinton Avenue East, and the private internal road.

Did we get it right for local residents, the City, and the developer? They say a good barometer of a successful mediation is when both parties are somewhat unhappy. I’d say we are pleased with the design improvements, but a little disappointed that we did not get the density reduced further.

What about Section 37? This opens a whole realm of possibilities for Leaside to have a say in setting priorities for how the funds are to be allocated. There is the opportunity for the City to elect to secure a 10,000 sq. ft. “community facility” on site. In addition, there are numerous off-site candidate projects like the Laird in Focus proposed connection to the Don River trail from Vanderhoof.

How do we ensure the Leaside community has a role in priority-setting? That’s where the new Leaside Town Council comes in. The community council proposed by Glenn Asano in his August 2019 column is getting established. Stay tuned!

Finally, a big shout-out to Councillor Jaye Robinson, a most determined negotiator. Though not able to be there physically, she was in fact very much there; the settlement bears her imprint. We wish her all the best for a full recovery following her treatment.