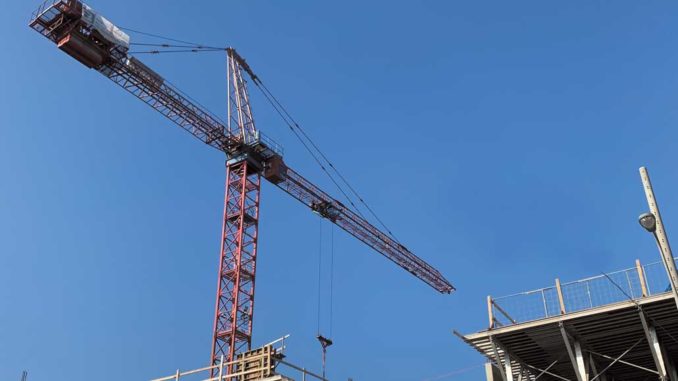 • 1408-1420 Bayview. Midblock between Merton and Davisville – the project rezoning is approved and the site plan is under review.

• 1674-1684 Bayview. Between Hillsdale and Soudan, which is under construction, rising about floor a week.

Now enter 1718-1734 Bayview – mid-block between Soudan and Eglinton – which may be the most contentious of the new mid-rises.

The proposal is for a nine-storey building (density 4.34 times the lot area) consisting of retail units at grade and residential uses above, including 123 residential units with a mix of unit types, including townhouse units and parking for 163 cars. The project involves the demolition of four two-storey semi-detached residential house-form buildings and one half of another two-storey semi-detached house at 1734 Bayview Avenue.

Why contentious? One reason is the proposed location mid-block, with two-storey homes on each side, and backing onto two-storey homes, without a rear laneway, which creates significant “fit” and connectivity concerns with the existing neighbourhood. The only access (and egress), being to Bayview Avenue, creates a difficult and potentially dangerous situation.

The proximity to Eglinton Avenue makes a signalized intersection undesirable. In addition, we hear there may be another application in the works for a long-term care facility in the north part of the large block bounded by Eglinton, Soudan, Mann, and Bayview. This may lead to an assortment of buildings that do not relate to each other, and are out of scale. The City should require a block plan which considers building articulation, separation, connectivity/access and public realm. In addition, there should be consideration of how the development on this block affects the Talbot Apartments across the road, which are considered heritage properties.

The proposed building is one storey and three metres higher than the permitted height, established through the recently approved Midtown in Focus secondary plan (which required approval by the province as well as the City). The shadow impacts of the additional height as well as balcony overview (privacy issues) on neighbouring properties, and on Bayview Avenue, will need to be assessed in relation to the regulatory angular planes.

And here’s where the “creep” comes in – the Floor Space Index (FSI) comes in at 4.34 times the lot area, which is significantly higher than the other Bayview projects to date, and puts it in the same density class as the high-rise projects on Eglinton at Bayview, Laird and Brentcliffe – which ultimately means that we are replacing a lot of trees and green space with concrete.

Finally, as noted earlier, the buildings to be demolished currently include half of a semi-detached house. Regardless of whether this is legally allowable, it seems both highly inappropriate and undesirable!

On September 10, North York Community Council approved a Preliminary Report that recommended that staff schedule a community consultation meeting for the application.

So, you will shortly have an opportunity to have your say. Likely this will be a virtual meeting, our area’s first on a planning project.

It’s the Year of the Ox and Leaside families are celebrating…including mine. We – my daughter Zhen, born in China, my husband Warren, and I – enjoy celebrating with family and friends. We indulge in …more

Agnes Campbell Macphail was once described as “the most important woman in public life that Canada has produced in the 20th century.”  In 1921 she blazed a trail for women with her election to the …more

Leaside is well-known for its shopping, its restaurants, its leafy streets, its 72 storage facilities … and its history of ski jumping. Yes, neighbours, Leaside was once THE hub of ski jumping in Toronto. In …more