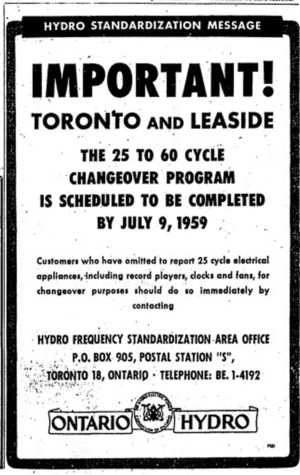 Few people today know of Ontario’s frequency standardization project. But in the 1950s, it was one of the largest, most expensive and ambitious energy projects ever undertaken.

The 10-year, $400 million project was launched in the late 1940s by the province’s electricity provider, Ontario Hydro. Its goal was to convert or replace virtually every electrical appliance, machine, gadget, and power tool in southwest Ontario so that households and businesses no longer had to rely on the outmoded 25-cycle power system used by the region since the early 1900s. Since the rest of Canada and the U.S. operated on a 60-cycle electrical system, the economic benefits of the switchover would be substantial.

To manage this gargantuan project, Ontario Hydro chose the Leaside-based engineering firm Canadian Comstock, whose headquarters were at 206 Laird Drive. With operations across Canada, Comstock had a well-established reputation as a successful and dependable electrical contractor.

The task was formidable.

Over five million pieces of equipment had to be converted or replaced – requiring hundreds of engineers and technicians, travelling hundreds of thousands of miles across Ontario. An average house was estimated to have at least six items requiring conversion, but some – like one household in East York – had as many as 39 electrical items.

In response, Comstock established a separate division and plant in St. Catharines, Ont. with nearly 1,200 workers dedicated to the project. The company also acquired a fleet of more than 1,000 trucks, vans and other vehicles to transport its service people around the province.

When the project completed in 1959, Ontario Hydro and Comstock personnel had visited over one million individual locations and converted nearly seven million pieces of equipment.

The last home to be serviced was in Leaside – the residence of Arthur A. McMichael of 115 Hanna Rd. On the day of the switchover (July 9, 1959), dozens of onlookers and dignitaries – including the president of Canadian Comstock and the chairmen of Ontario Hydro and Toronto Hydro – arrived at the McMichael home. In anticipation, the front porch had two light bulbs mounted on a board. One was a lit 25-cycle power bulb; the other was an unlit 60-cycle power bulb. As technicians converted the last of the home’s appliances, the first bulb flickered out and the second one lit up – signifying the massive project’s completion.

Following the ceremony Mr. McMichael and his wife were given an electric clock to mark the occasion. Thus ended what many consider the greatest electrical initiative of its kind in the world. And Leaside played a major role in its execution.

Correction: My article in the July, 2021 issue of Leaside Life mistakenly asserted that Bob Davidson, the Maple Leaf hockey-player and scout, was also Leaside’s Recreation Director. In truth, the position of Recreation Director at that time was held by another individual, coincidentally also named Bob Davidson. The author regrets the error.

This article was guest contributed by Ted Dewelles of the Leaside Heritage Preservation Society.