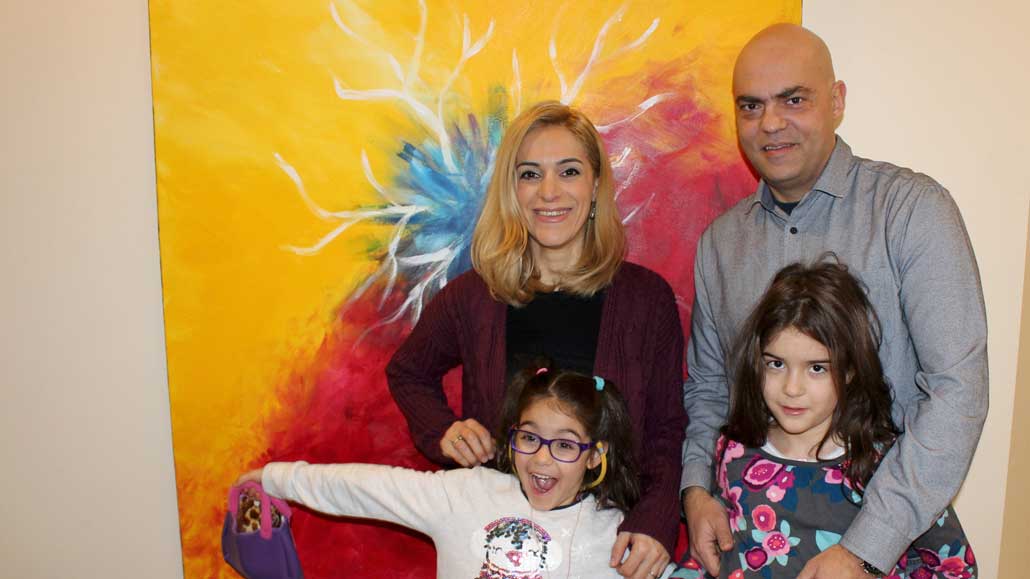 Recently, I met a new Leaside family: Panagiotis Podaras, his wife Rania, and daughters Alexandra (7½) and Giolanta (4½). I spoke to Panagiotis about their path to Canada – and Leaside.

Panagiotis was recruited to work as the quality control manager for Crosslinx Transit Solutions, the contractor of the Eglinton Crosstown LRT, for the whole of the 19 km LRT project. He has 24 people, one for each station, working under him to ensure that everything is built according to the specifications and contract requirements.

His path towards this job started in his hometown of Patras, Greece, where after high school, he studied civil engineering, and then did his required military service. A friend working in Saudi Arabia asked if he would like to work there. He accepted, thinking he would be there for maybe three months. Thirteen years later….

In 2008, he was working on a telecommunications project in Syria, before the current troubles. Through friends, he met Rania, who lived in Homs. When the project was finished, they married and moved to Saudi Arabia, where both Alexandra and Giolanta were born, but their passports show Greek citizenship, because of Saudi regulations not permitting citizenship to outsiders.

Panagiotis says his Arabic is “terrible – only a few words,” which means that he and his wife use English as their common language. He jokes that this creates a communications barrier between him and his mother-in-law, who still lives in Homs.

For the last few years, the family lived in Qatar. While the two girls were enrolled in a British school and were learning a lot academically, Panagiotis and Rania realized the Middle East was not where they wanted to continue raising their daughters. When the opportunity arose to move to Canada, they were excited at the prospect.

Advice from colleagues about a location in Toronto was to look for a neighbourhood with “mature trees.” Leaside fit the bill – and, bonus, is also close to the LRT – so they have started their life in Canada in our neighbourhood. Already, they feel comfortable in Leaside. They feel they can settle here with stability and call Canada home.

About Lorna Krawchuk 144 Articles
Lorna Krawchuk is publisher of Leaside Life. She is actively involved in St. Cuthbert’s Church. Her volunteer activities with the Leaside Property Owners’ Association led to her being elected a Councillor in the Borough of East York for 9 years before amalgamation in 1998. She also held a variety of volunteer leadership positions with the Girl Guides of Canada for over 30 years. Lorna has been a Leasider since 1968.

With a keen eye for fashion trends, Leaside resident and owner Heather Bolt realized her true calling and established Dotty Dress Studio in 2010. “In university, I found myself sewing and altering pieces and my …more

Wilmar Kortleever: the ultimate community champ since landing in Leaside

Unlike the legendary Flying Dutchman ghost ship which could never make port, Wilmar Kortleever wasted no time making his overseas journey and landing in Leaside. Although he was deeply ensconced in his Netherlands community, life …more

Most Leaside residents fume when they see lots of vehicles in our hood. But Barry Thomas lights up just thinking about cars. As long as they are miniature in size – and parked inside his …more