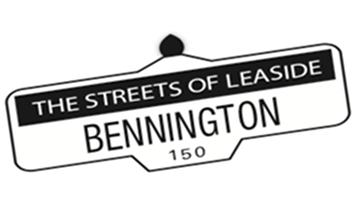 A few months ago, I was asked about the names of Bennington and learned that Bennington was the maiden name of the solicitor Thomas Mansell Weatherhead’s wife, Evelyn Maud Bennington. Evelyn was the daughter of Col. Alfred A. Bennington, a member of the 4th Hussars and colonel of that regiment, and also the owner of “Moorecroft,” an estate in West Prescott.

Both Evelyn and Thomas were active in East York throughout their lives. In 1925, they bought their first house, at 30 Rosemount Ave., and changed the street’s name to Bennington Ave. in honour of Evelyn’s family. They lived there all their lives until Thomas Mansell (known as T.M.) Weatherhead died there on December 24, 1975 at the age of 82. Both were active in community life. Their house had been built by architect Bruce Brown, and called “Gyll Edge” for its overlook of the ravine of the Don River Valley. Bruce Brown, associated with artists in the Group of Seven, had also designed many churches around Toronto.

Only two shopping strips in my old days

Did you see the 100-year anniversary exhibit called the Layers of Leaside? For those who, like me, grew up here it brought back a lot of memories, especially when I read the Leaside Business Directory …more

Francess Halpenny has died at the age of 98. Halpenny joined the University of Toronto Press as an editor in 1941 upon graduating with a Master’s degree in English language and literature. She served a …more

Who would buy this town hall?

You have seen the sign. The former Leaside Town Hall at the corner of McRae and Randolph is for sale. But who would buy a former town hall attached to a fire hall, once the …more